Up the stairway and behind two sets of locked doors, deep inside the residential floors at the City Rescue Mission, is Patrick Chesebrough’s office. Stepping inside, you are surrounded by walls hung with at least a dozen of his paintings and drawings.

“I probably have this much more at home,” Patrick says. Most of these works were produced this year, the result of a blooming creative force that wasn’t always good for his health. 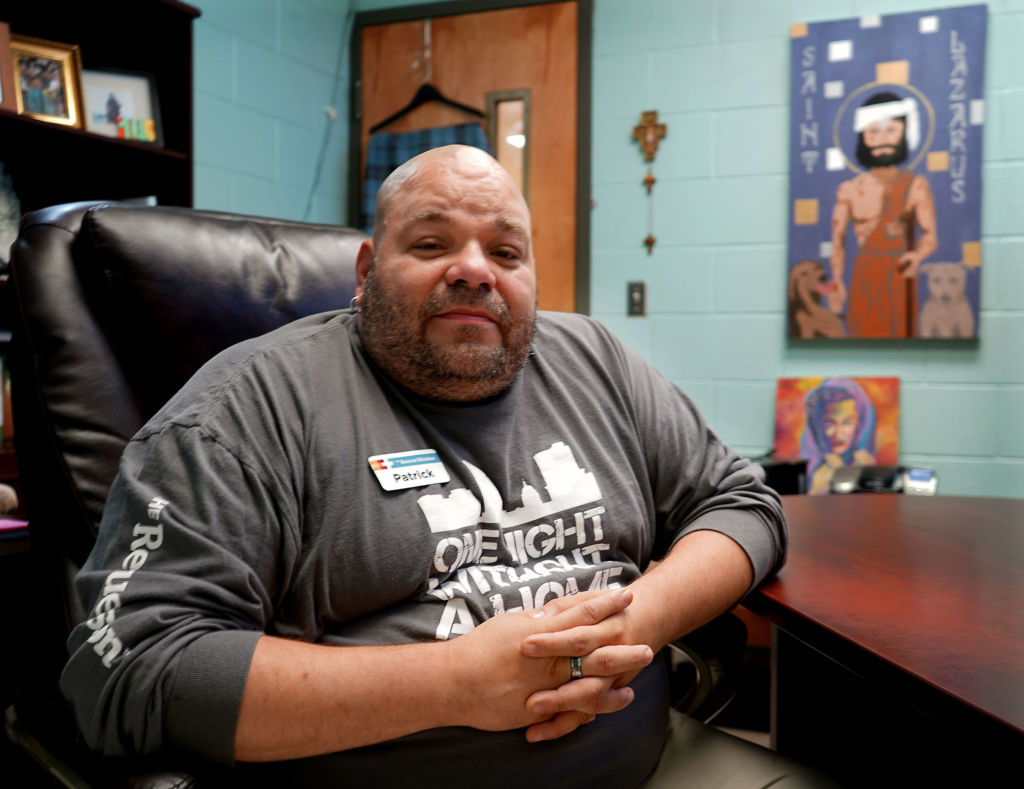 Patrick Chesebrough in his office at The Rescue Mission.

In the early 2000s, Patrick was working to move past a history of substance abuse that did him no favors. He met his wife while attending Herron School of Art and Design in Indianapolis. Soon, the couple married and had a son. Patrick was pursuing a master’s degree in social work. Life seemed to be coming together, but still, things weren’t quite right. Without alcohol and drugs, Patrick’s mood swings were becoming more severe.

“I would enter a semester, get straight A’s for a month then fall right off the face of the planet and drop out and flunk out of school,” he said.  “I went through that three or four times.”

At this point, it became clear that art might not be a refuge, but possibly part of the problem, especially when it interfered with being present at home.

“It was a real trigger for my mania,” he said. “Anytime I would get into an art project, it would trigger a manic episode. In the same way that I had to make the decision to put the drink down, I had to put the brush down.”

Even without pursuing his art, Patrick’s mental health continued to make life difficult, keeping him distant from his wife and kids. In 2008 his wife insisted that he see a doctor.

“My mood swings had gotten out of hand,” he said. Seeking help, he was diagnosed with bi-polar disorder and prescribed medication to control his mood swings. The change was dramatic. For the first time in memory, Patrick realized “My head is silent right now.”

His new-found stability allowed Patrick to complete a master’s degree that eventually led him to the Rescue Mission. There, he found that his history of substance abuse and mental health challenges was useful when it came to helping men at the Rescue Mission put their lives back together after their own extended bouts of addiction, homelessness and unattended mental health issues. That said, there were still risks.

“It’s impossible for me to do this job disconnected,” he said. “I have to allow myself to be emotionally attached to these men. I can’t be effective in helping them without letting them into my life. In doing so, I also open up my heart to being hurt when there is relapse or betrayal.”

In February, the cost of his openness became clear. A client that he had been working with for 8-9 months relapsed, bought some heroin, overdosed and died.

“It crushed me,” he said. “I questioned my ability to be of service. It even made me question if I had a place in this field at all.”

Patrick sought counseling to help process his grief and self-doubt. Learning about his art school background, his counselor encouraged him to start to paint again after a nearly two-decades long sabbatical.

Tentatively, Patrick stretched a canvas, built a homemade easel, and began to paint again. This time around, things were different. Remembering, his eyes fill with tears.

“I started to paint, and all of this tied up stuff inside of me just started to unravel,” he recalls. “From the moment I picked up the brush I could feel the healing start to happen. I haven’t been able to put the brushes down since March and use this to continue to heal and express myself. When I got done, I didn’t have that mania. It was more a feeling of release for me.”

One of Patrick’s early paintings, also his Art of Hope submission, is an iconic portrait of Saint Dymphna, the patron saint of the mentally ill. 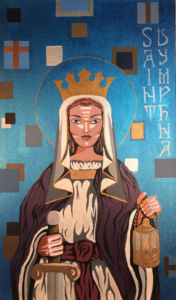 “She is one in a series of five saints that I painted who are all associated with mental illness, homelessness, addiction, and redemption,” he said. “It was something that stood out to me. There was a patron saint for me.”

Today, not only does Patrick continue to paint, but he’s working to develop a program that he believes will help the men of the Rescue Mission overcome their life barriers through arts-focused therapeutic intervention.

“When they get here, they’re broken,” he said. “Let’s help them remove a layer and then start to open up and communicate in a non-verbal way. It’s a place to start for them.”

You can view Saint Dymphna and many other artworks at the Art of Hope exhibit, opening October 24, 2019. The exhibit is being hosted in Gallery 101 on Manchester University’s Fort Wayne Campus. Join us at the Grand Opening on October 24 at 6:30 pm, or feel free to stop in M-F 9 am – 5 pm to view the gallery. The exhibit will close on January 24, 2020.